I thought I'd have a look back over the past year and see what I'd achieved (or not) from a wargaming point of view:

28mm Macedonian Successors:
Apart from the first batch of 16 skirmishing archers I've not really got anywhere with this army. Bit disappointing really. I think the lesson to learn here is only to invest in 28mm if I have an opponent whose doing the same, building two armies in this scale is well beyond me these days. The Aventine Miniatures figures are really really good and well worth a look.

28mm Wars of the Roses:
I've been more successful with these having worked out a method of painting them that I was happy with and able to keep doing (if a little slowly). The same method could be applied to the Macedonians if I ever get around to doing them. At least in the case of this army I do have an opponent who will be painting up his Wars of the Roses collection.

6mm WWII:
Through a combination of reorganising what I already had and painting up some new models I've completed over 85% (450+ bases) of the models needed for the 6 WWII armies I have on the go. I think I've painted up about 150 bases this past year which isn't bad going.

I still have plenty more models (painted and unpainted) that could be used for yet more armies but I think for the moment I'll focus on completing the 6 paired armies I have already started.

From an army list point of view I finished the process of converting them all to platoon scale but have been tinkering with them from time to time, adding one or two units or amending others.

6mm Moderns:
I've recently finished a few models for the Cold War era including a battalion of M1A1's which hasn't been flocked yet. I have two pairs of matched armies planned out and have all the models for them but so far have only painted about 10% of them (700+ to go!!!).

Admittedly I'm not that sure I want to game the modern period or not as I find WWII more interesting and my resources are very good for that period and much poorer for the post 1945 period. There was a point in the summer where I nearly sold the lot but decided not to (partly because Dettol is wonderful (if smelly!) stuff for correcting paint jobs you're not happy with!). I'm tempted to just pack all the modern stuff away and focus on other periods (700 models is after all a few years worth of work and I would like to do one or two other things).

6mm Napoleonics:
Having found a really good step by step painting guide I did manage to paint up quite a few of the Adler French I'd had sitting around gathering dust for many years. I'm really quite pleased with how these came out but do realise that I need to do more reading around the period before I take this project any further or buy an opponent for the French.

6mm Anglo-Zulu War:
I've made some progress with these this year mainly in terms of rules and basing. I invested in a copy of Black Powder and rebased all of the completed figures on to company bases (100x60mm). I'm very pleased with the way the bases have come out but haven't yet got around to trying out the two completed "brigades" on the table top.

6mm Scenery:
I invested in some new scenery from the Leven Miniatures range but haven't yet painted that much of it. I've got various farm buildings, bunkers, command posts and sand bag defences still to do. Mick at Leven Miniatures also very kindly produced me a set of supply dump markers which he's subsequently been able to add to the range.

A friend of mine has also very kindly painted up a load of 6mm train track and a German BP44 armoured train for me which I look forward to using on the table top in the near future.

Games:
I did manage to get in a few games this past year (mainly thanks to my wife taking pity on me, though she does have a habit of winning!) but didn't for a variety of reasons get all the games in I had planned.

1. Finish the 6 WW2 armies.
2. Try and get a game in at least once a month even if they are all solo.
3. Finish more of the 28mm Wars of the Roses figures (I have plenty more).
4. Try out Black Powder with my Zulu War figures - I don't doubt that Black Powder will work for the era I just want some experience with the set before painted more figures so I can plan things out properly.
5. Finish the 6mm scenery I brought from Leven Miniatures and add a few more pieces.
6. I'd like to do something Ancient or Early Medieval but at the moment am not sure exactly what but I do know it will be something small scale (perhaps 12-15 bases/units a side). I suspect I'll get hold of a copy of Dux Bellorum at some point as one of my friends is building an army for it so a Romano British army might appear at some point as I'm very tempted by the Pendraken 10mm Late Romans. The new Crusades period 6mm from Baccus also appeals to me as well....

Happy New Year to all

Posted by Richard Naylor at 18:21 No comments:

Here's the first models for the 18th Guards Motor Rifle Division's 369th Tank Regiment. Being part of the Soviet Forces based in Czechoslovakia I get to use one of my favourite 6mm T-72 models (Heroics and Ros SM62). First up is a single tank company of 3 platoons: 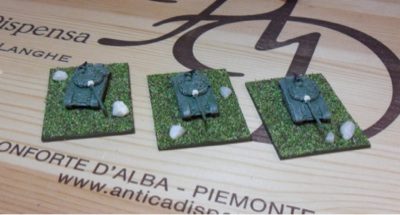 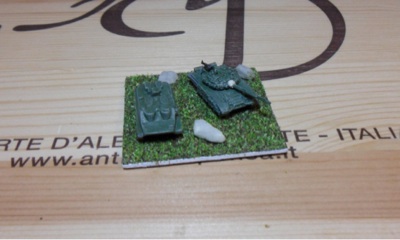 BTR-60PB (SM16) engineer transports (1 platoon each for the Tank Regiment, BMP Regiment and the Division Engineers): 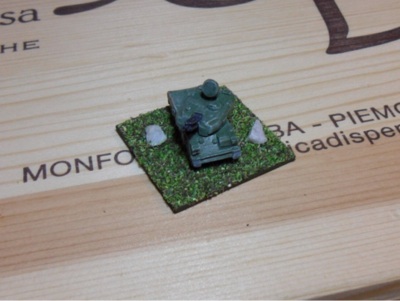